It is not easy being perfect, just ask Ed Hochuli, a widely respected NFL referee who blew a huge call last week during the Denver Broncos’ San Diego Chargers football game. You can not miss this guy. He has been a referee for many years and has worked playoffs and Super-bowls. Not to mention his arms are the size of tree trunks and he looks like he should be playing line-backer instead of throwing flags.

Anyhow, the point I am trying to make is that this guy set the standard for NFL ref’s throughout the league. Week after week, game after game, Ed Hochuli was the definition of steady and consistent.  In the world of referees, he was considered the best. Then came last Sunday, one bad call and bam!  Many in the media and fans across the country deriding him as brainless and calling him the worst referee on the planet.

However, Ed is taking it like a champ. He is facing up to his giants. After receiving hundreds of hate filled e-mails, Ed is personally responding to every single one with a sincere apology.

So, what is the lesson in Project Management? You have got to be on your game and make the right decisions without EVER making a mistake? That’s impossible! But, what we can control is how we respond. People respect someone who takes responsibility for their mistakes. So, own up to it and move on. Only then can your team do the same.

The early World War I fighter planes had machine guns mounted above the fuselage.  They fired right through the spinning propeller.  That worked most of the time, but occasionally cut the propeller right in two!  I’d call that a bug.

I’ve learned over the years to fix my bugs quickly.  As soon as they are discovered.  Leaving unfixed bugs in a product can result in some nasty consequences.

Suppose you’ve got a small bug that bothers a few smaller customers.  It may not cost you anything in lost sales.  Most people can live with it.  But then along comes a big demanding customer.  When he sees it, maybe along with a few others, he freaks out and decides not to purchase.  You just lost a great sale because of one little bug.  A bug you could have easily fixed.

Moral of the story: don’t cut your propeller in half.

I have written in past blogs about Project Management being a lot like coaching. One part of this I want to elaborate on is our words. I can imagine, in the heat of battle, coach Paul “Bear” Bryant would drop a few “f” bombs on a player, get in his face, and challenge him to do more–and to do it better.  That does not fly as well in the corporate world. A football player can rush on the field and translate that aggression into physical action. It works on the field but not so much in a cubicle.

However, in the office, a manager must still learn to pull the right strings and push the right buttons. The best way to do this is by getting to know your team. Use personality profiles, spend time with your employees sharing their interests, and things outside of work. Then, you will have a better feel for who needs a kick in the pants and who needs a pat on the back. NOW GET YOUR TAIL OUT THERE AND MAKE SOMETHING HAPPEN…and do not drop the ball. 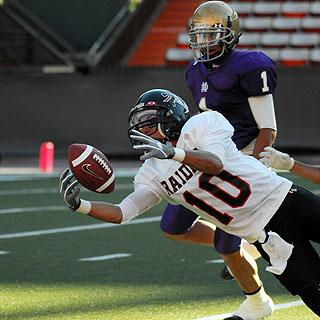 In my line of business, we often get customers who say, “If your product only had this great feature [that I need] it would really sell.  You’d make a million dollars!”

Such enthusiasm prompts us to run off and produce the requested feature as soon as possible.  And when we do…  Nothing happens.  Nobody’s there to heap praise on us and pay the big bucks.  The product doesn’t sell any better than before, and no such millions are made.  It begs the question: do new features make money?

Certainly from a short-sighted standpoint, the answer is no.  There are no crowds of new customers clamoring for the new feature.  In fact, most evaluators simply take the new additions for granted, and only stop to comment when something they want is missing.  No praise is given for products with great new features.  But lots of crap is shoveled out when something isn’t there.  That’s just normal human nature.

But over the long term, a constant flow of new features that solve customer problems is a good thing.  It builds your customer base and takes the heat off sales and support staff.  View it as a long-term investment that will eventually pay.

Call me crazy, but it seems that when summer rolls around work and projects slow down.  So, I say, do nothing. Well, that does not go well with the boss so what is the alternative? There are key people on vacation every other week. Then others are taking off early on Friday to make a three day weekend. Before you know it key decision makers are consistantly out of the loop and major milestones are delayed. So, you dump more work on the “active” members of the project and it slows their work down, or seriously inhibits their quality of work. Either way, it is not pretty. Most managers will tell you to build in a cushion for these types of issues and delays. I say take the summer off.  How about you, any suggestions?

I’m a project manager for Hewlett-Packard and enjoy my profession.  A power nap doesn’t apply to all, as there’s some people who can’t get to sleep for awhile … maybe to tense or tight … then there are some of us … who work from home … didn’t sleep so well the night prior and sometime during the day are tapped … so I recommend – “The Power Nap” … which for me these days is about 10 – 15 minutes and then I’m good for another 2 hours at least … one can set the alarm on your cell phone {make sure it’s on the standard setting, not vibrate} and enjoy … I find I’m totally refreshed and can really be productive on the next challenge, as opposed to trying to push my way through and aren’t as effective as a moment will provide … and for those working in an office … I guess there’s always the jaunt out to the car for that quiet moment …

I used to drink coffee to muscle through those moments but 15 – 20 cups a day makes me jittery by the end of the day.  🙂

Hope this helps and … may your journey as a PM be an enjoyable one.